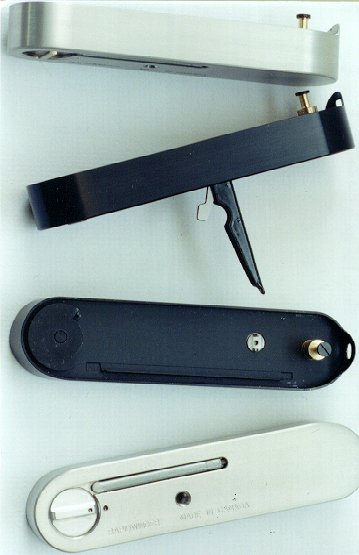 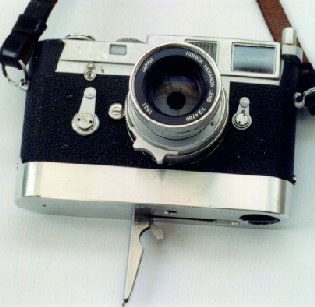 M2 Rapidwnder-IXMOO fits the M2 and MD without modification.

A limited edition 94 of M2 Rapidwinder-IXMOO were made. With this  Rapidwinder-version you can use the reloadable Leica IXMOO-cassettes or regular film.

The original idea for the Rapidwinder came about after the demise of my Leicavit MP’s. They were impossible to repair and had become prized collectibles and furthermore they did not fit the M4-P’s and M6’s that I was using.

In 1987, I proceeded to make a small batch of brass housings and drives that would engage the drive connection for the Leica Power-winder and after several trials and errors I managed to get some working prototypes going.

In 1989, I realized that modern technology allowed me to have the cases machined from alloy, using Computer Numerically Controlled (CNC) milling equipment.

Today the  Rapidwinder Classic is essentially the same machine as the 1989 version, although I have kept on upgrading parts and designs as time has gone by.

The Rapidwinder adds 14 mm to the height of the camera and 125 grams to the weight, the multiple pin clutch used in the drive allows the user to shoot very fast. It is possible to achieve up to 2-2,5 frames/second with experience.

The material used in the Rapidwinders is high tensile strength alloy, stainless steel and brass. The drive is a reinforced toothed belt, quieter than the original chain drive of the MP’s as well as less prone to stretching.

The original Leicavit MP was a very complex design, containing 50+ parts in the housing. The Rapidwinder  contains less than 10 individual parts and can, in most cases, be serviced by the user.

The Rapidwinder is particularly convenient for those of us who focus with our left eye. For years we had to deal with film advance levers poking us in the right eye or having to drop the camera slightly to advance film, thus breaking the concentration when shooting.

“Tom’s Rapidwinder is as quiet as if you advanced using the thumb of your right hand in the normal fashion. Quite frankly it is silent, fast and of efficient action in the use of the camera. For any M6 camera user it’s wonderful. However it’s a God sent gift for those of us who are left eyed shooters.” Dr.Ted Grant, Victoria, BC, Canada

You can see Ted’s photography at

Thank God Tom Abrahamsson is left-eyed. Left-eyed Leica photographers are always sticking their thumbs in their eyes when they use the thumbwinds on their cameras. It’s not a problem for right-eyed photographers or even left-eyed users of motorized SLRs. Indeed, my EOSs don’t even have thumb winds. But that small, quiet camera, the Leica, that sees so well in dim light, has a thumb wind. And I am left-eyed. And I am tired of taking the camera from my eye to wind my film. Or sticking my thumb in my eye when I forget. Tom has solved the problem. He has made a rapid-trigger basewinder, in essence an improved version of the old Leicavit basewinder made in the early sixties for the Leica M2. Worked by the left hand fingers that are not focusing the lens, the basewinder can advance the film at a rate of 2 to 2 1/2 frames per second. Yes, faster than a speeding thumb. The best I can do with a thumb wind is about 1 1/2 frames per second. Far more important, I do not have to displace my camera from my eye and lose my concentration on the subject in order to advance the film.

Certainly, for anyone, left or right-eyed, using the center-mounted auxillary finders with the 21, 28 or 90mm lenses, winding without pulling your eye from the viewfinder is easier and faster with the RapidWinder. That can’t be a full explanation for the popularity of the winder with you right-eyed people. The best I can fathom from my right-eyed bretheren is that the winder adds a “near-motor experience” without the additional weight, size, noise or dependance upon batteries of a conventional motor. Oh, and you also get a centered tripod socket in addition to the normal Leitz socket, and a lot of weird looks from Leica collectors. And, most important, since those collectors have scoffed up all the old M2s and Leicavits, the RapidWinder fits on the current M6 and the M4-2/M4-P. Tom also makes a version for the M2.

Here are the specifications of the winder as copied from Tom’s website: “The current version fits the M6, the M4-P and the M4-2 without modification to the camera. It adds 14mm to the height of the camera and 125 grams to the weight, the multiple pin clutch used in the drive allows the user to shoot very fast.

It is possible to achieve up to 2-2, 5 frames/second with experience. The material used in the RapidWinder is high-tensile-strength alloy, stainless steel, and brass. The drive is a reinforced toothed belt, quieter than the original chain drive of the MPs as well as less prone to stretching. The original Leicavit MP was a very complex design, containing 50+ parts in the housing. The RapidWinder, on the other hand, contains less than 10 individual parts and can, in most cases, be serviced by the user.”

Tom travels a lot–Germany, China, Japan, Cuba, and even Boston in the last few months. But you can drop by his website anytime at http://www.RapidWinder.com. You get to see a few more things a photographer who is a good machinist can come up with. My favorite is a “goggled” 21mm lens. Tom designed it and a famous Leica repairperson executed it. With the 21 on a rangefinder camera, you normally use an auxiliary finder. Leitz once made a “goggled” 35, it had an optical attachment which expanded the 50mm frame of the M3 to one for a 35. They added those goggles to a 21mm lens and produce a lens that needs no auxiliary finder on a current Leica. Sounds very useful, but it does pose the question, “What did they do with all the 35mm lenses that were originally attached to the goggles?” Tom Abrahamsson’s background includes stints as a professional photojournalist and a  professional industrial designer.  His Leica   M RapidWinder  is a marriage of his professions … if you leave out extraneous jobs such as Ferrari GTO car trader and King Cobra transporter (the snake, not the car).   The production of the UR RapidWinder was no easy task, because Tom had absolutely no experience as a machinist.  He started from ground zero.  Standard RapidWinders fit the M4-2, M4-P, M6, and M6 TTL, but M2 RapidWinders have also been produced.  All RapidWinder pics on this page courtesy of Vancouver’s famous Tulikki Museum of Industrial Design.

This is IT, the legendary UR RapidWinder!    Tom 1st got the idea in about 1984, but this first  hand made brass M6 UR RapidWinder prototype was not produced until 1987.  Notice the Leica M type opening key, which was dispensed with in later versions as being too complicated and time consuming for practical production. Notice the lever wind lock is also different from production RapidWinders.

Compared to the UR RapidWinder, notice the differences in the RapidWinder lever, its lock, and the closing latch, as wall as the addition of the engravings. This is the 1st  production RapidWinders, number A-001.  The outer shell and bottom are built from two pieces of brass.   This construction was continued until number A164, when it was replaced with a one piece milled body. Very rare Super Deluxe RapidWinders have stainless steel drives.  The stainless steel makes for even a smoother advance.   These have never been listed for sale, and very few people even know they exist.  While the standard RapidWinder drive mechanism takes about one hour for Tom to machine out of brass,   the same drive out of stainless steel takes about six hours for Tom to produce — not an easy task.    Six were made on special order for National Geographic.  The other two dozen or so were not sold, they were bartered.  Tom refuses to sell them, and only trades them for prints by photographers he both admires and respects.